If the United States stopped viewing CBD as an illegal substance, it would unlock the marijuana compound’s immense potential as medicine, the “father of cannabis research” said Saturday.

Raphael Mechoulam, a Hebrew University professor and organic chemist with six decades of research on cannabis, was in Colorado to serve as the keynote speaker for the inaugural conference of the Colorado State University-Pueblo’s Institute of Cannabis Research. 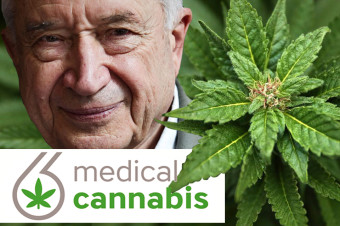 Mechoulam is credited for the discovery of the endocannabinoid system and the isolation, determination of chemical composition and structure, and synthesis of the major cannabinoids

“I believe that CBD has to be moved from the highest illegal situation next to heroin, which doesn’t make sense, because it’s not toxic, doesn’t cause any addiction, so it should be moved,” Mechoulam said to The Denver Post and The Cannabist in a brief interview following his speech. “And once it’s moved, more people will be using it. And I hope it will become a major (medicinal) drug.”

Mechoulam’s hour-long speech focused on his research, an extensive collection that includes roughly 400 scientific articles cited nearly 100,000 times. Mechoulam is credited for the discovery of the endocannabinoid system and the isolation, determination of chemical composition and structure, and synthesis of the major cannabinoids – notably cannabidiol (CBD), delta-9 tetrahydrocannabinol and cannabigerol (CBG).

Mechoulam also discussed the “entourage effect,” a concept he helped introduce to describe how cannabis compounds work in harmony to potentially produce more effective benefits than they would on their own. He expressed optimism that CSU-Pueblo, via its Institute of Cannabis Research, could conduct additional research on that theory.

Mechoulam highlighted some of his team’s findings over the years including: delta-8 tetrahydrocannabinol was shown to prevent vomiting and other side effects of chemotherapy in children with cancer; and CBD was shown to hinder the onset of Type 1 diabetes in mice and serve as an anti-psychotic for patients with schizophrenia.

The research is there and, in some cases, has been there for decades, he said.

Now it’s a matter of somebody putting the findings to use and advancing the science into medicine.

“It should be done … but unfortunately, nothing is happening at the moment,” Mechoulam said.

Clinical trials are costly and those in academia don’t have the ability or the resources to take the next steps, he said, adding that he’s been “waiting for about 10 years” for a pharmaceutical company or other significantly sized entity to conduct a clinical trial on the effectiveness of CBD in the prevention and treatment of Type 1 diabetes.

“It’s a pity because in this particular case, diabetes type 1, it’s not different … in mice and in humans,” he said. “So here we’re missing something. I hope, one of these days, somebody will do a clinical trial and show, I hope, that one can treat diabetes type 1 with cannabidiol with essentially no side-effects.”

U.S. Drug Enforcement Administration officials consider CBD and other marijuana extracts as Schedule I substances, the strictest of the classifications; however, that policy position is being challenged in an ongoing federal appeals court case.

This story was first published on DenverPost.com