“Unjust laws exist; shall we be content to obey them, or shall we endeavor to amend them, and obey them until we have succeeded, or shall we transgress them at once?” – Henry David Thoreau

Witnessing the slavery and imperialism being carried out by government during the mid-nineteenth century, Henry David Thoreau was compelled to apply his transcendental philosophy to challenge the fallacies of the state. Civil Disobedience is one of the greatest American texts, and was a prime influence for Martin Luther King, Jr., who said, “One has a moral responsibility to disobey unjust laws.”

Civil disobedience is a familiar concept to those who realize that government does not possess a greater wisdom and justice than the individual simply because it is government. As Thoreau wrote, we have a duty to resist when the state is recognized as an agent of injustice.

This is sometimes even embraced by those working within the system. Rep. Allen Peake, a Georgia lawmaker, admitted that he defies unjust cannabis prohibition by bringing medical cannabis into Georgia from states where it is legal, such as Colorado. He recently delivered medical cannabis to a mother whose son suffers from seizures.

“I got a text this morning from the mother of a young child who I delivered product to,” said Peake. “And the heartfelt thanks from this mother, the difference in this child – the increase in cognitive ability, the reduction in seizures, has been worth every bit of risk that I’ve taken.”

Georgia residents have just begun their struggle to gain the freedom to treat their medical conditions with a plant that is proven to be effective for many ailments. The ability of medical cannabis to reduce or eliminate epileptic seizures—without harmful side effects—is astounding and is recognized by medical professionals. The biggest news at the last American Epilepsy Society conference was a landmark study showing that a cannabis extract vastly reduces seizures in children.

Yet this miracle treatment is denied to people in more than half of U.S. states and is still completely banned by the federal government as a Schedule 1 drug with “no currently accepted medical use.”

In the face of such injustice, some are moving to states with legal medical cannabis, some continue suffering or rely on prescription pills, and some engage in civil disobedience. Allen Peake is a model of virtue among a cesspool of state corruption.

He routinely visits former Georgians who now live in Colorado so they can treat their conditions without the fear of being locked in a cage.

“Listen, I made a commitment to these families when I got involved, that I was willing to do whatever it took to make sure they had access to a product from a reputable manufacturer. I’ve made good on that promise. If it involved civil disobedience, it’s been absolutely worth it,” said Peake. 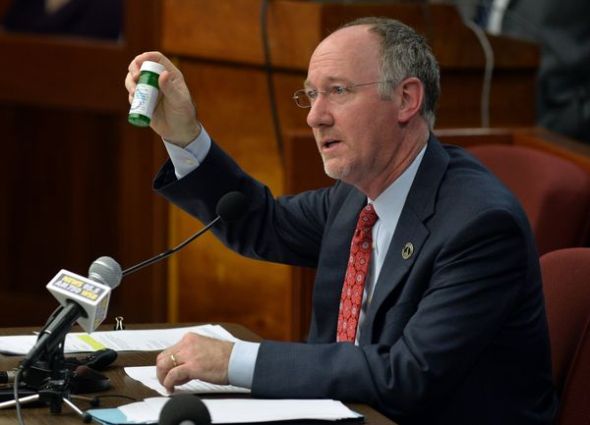 Rep. Peake has also introduced a bill in the Georgia House of Representatives that would expand the number of diseases and conditions for which cannabis oil can be prescribed, and also calls for “a minimum of two and a maximum of six in-state manufacturers for the production of all medical cannabis within the state by Dec. 1, 2016.” More than 100 House members have signed the bill.

The proposed bill follows up on Georgia’s first step taken last year to decriminalize medical cannabis, called the Haleigh’s Hope Act. It gave limited protections to those who use or administer cannabis oil, such as desperate parents who witness their child having endless seizures.

An Atlanta mom is having to resort to the black market to get the only thing that works to stop her daughter’s violent autistic episodes—medical cannabis. She showed a heartbreaking video to the local Channel 2 station of the father trying to restrain his 5-year-old daughter so she doesn’t severely bite herself. After trying 30 different supplements and medicines unsuccessfully, cannabis is the only thing that prevents the violent episodes and allows here daughter to engage in normal tasks. She buys cannabis on the black market and makes the oil extract at home.

Mike Buffington is editor of the Jackson County Herald, a self-professed conservative, and father to a 21-year-old son who has suffered seizures for 15 years. He wrote a column last month called I’m Growing Marijuana.

“My pot plant is really something of a civic protest against absurd state policies that prevent children who suffer from seizure disorders from getting help,” said Buffington.

He found a variety of cannabis that is low in psychoactive properties and high in seizure-fighting substances. He is going to plant the seed and use an indoor grow kit, hoping to gain a green thumb through his act of defiance. Buffington will post pictures of the progress.

“I’m making a political statement, but I’m trying to show that it’s just a plant. If it has the potential to help people, why not open the door and see what we can do with it?” said Buffington. “Obviously, if you’re going to do civil disobedience, you know what the penalties potentially are, and you’ve got to be willing to take those penalties.”

In his case, possessing one plant would be a misdemeanor. No cops have come knocking on his door yet. Law enforcement must be in a quandary here, as charging Buffington would showcase the absurdity of “just doing their job.”

These acts of civil disobedience are enraging state prosecutors, who are undoubtedly working to derail Rep. Peake’s proposed House bill to expand medical cannabis access. The governor has already made his opposition clear, and there will be resistance in the Senate. Cannabis prohibition is too profitable for law enforcement and prison industries to give up easily.

The tide against these agents of injustice may already be too great for them to resist. Civil disobedience is among us and growing. Thoreau would be proud.

Source: The Collective Intelligence
By Justin Gardner, The Free Though ProjectSOURCE
He makes a $100,000 donation to marijuana research in Colorado each time a box shows up. -The Oily Guru

F A C T O I D
Famous people we know and pot. George Washington was discovered to have used cannabis. He wrote on more than one occasion about his plants and how to grow them. Richard Nixon also helped Louis Armstrong to smuggle 3 pounds of marijuana at an airport. He was standing in a line when Nixon passed by and when he saw him; he offered to let him pass with him. Later his aid told him what happened. It is also known that Shakespeare and Carl Sagan, amongst many other used marijuana.
-The Oily Guru

Here is the other article:

Since at least 2015, one Georgia lawmaker has bravely defied the law to bring medical cannabis into his state, to help children suffering from debilitating conditions such as chronic seizures. Rep. Allen Peake’s campaign of civil disobedience has evolved into an extensive distribution network, and along the way, he has attracted the support of many lawmakers – even some who were formerly opposed to medical cannabis.

Peake is a self-described conservative Christian who says moral principles guide him in this endeavor. Seeing children confined to a hospital bed, after all the ‘legal’ prescription medications have failed them, is a compelling reason to challenge unjust prohibition and bring these patients medicine that works.

“We’re going to do whatever it takes to be able to help get product to these families, these citizens who have debilitating illnesses,” Peake said in an interview with the Associated Press.

Every month a cardboard box with cannabis derivatives arrives from Colorado to his office, whereupon it is distributed to hundreds of sick people around the state. Thanks to a 2015 bill championed by Peake, Georgia now allows patients with certain conditions to possess low-THC medical cannabis. But the law is still restrictive in that people cannot cultivate, import, or purchase it.

Enter Rep. Allen Peake. He gives the medical cannabis to patients for free, which is permissible under Georgia law. He can’t legally pay for it, either, so Peake makes a $100,000 donation to a Colorado medical cannabis research foundation every time he receives a delivery. He has a medical cannabis card which allows him to possess the product.

“Quite frankly, I don’t know how the product gets here,” Peake said in the interview. This deliberate ignorance is necessary because transporting cannabis across state lines is a federal felony. He will never recover the donation money, but helping people is more than enough payment for him.

Shannon Cloud, whose daughter has Dravet syndrome and has benefited from medical cannabis, now helps distribute the product from Peake’s office to Atlanta. She sums up the absurdity of the situation.

“It shouldn’t be this way,” said Cloud. “You shouldn’t be meeting at a gas station or a Target parking lot to get medicine to somebody. You should be going to the place where it is produced and tested to get it dispensed to you in a regulated manner, but this is what we’re forced to do.”

We first reported on the noble actions of Rep. Allen Peake in January 2016. Before Georgia began allowing very limited medical cannabis use, Peake was helping families move to Colorado so they could legally treat their suffering children. He visits them on a regular basis, witnessing in person how this miracle plant can transform lives for the better.

“Listen, I made a commitment to these families when I got involved, that I was willing to do whatever it took to make sure they had access to a product from a reputable manufacturer. I’ve made good on that promise. If it involved civil disobedience, it’s been absolutely worth it,” said Peake.

The joy of knowing that sick children are being healed compels this lawmaker to build upon his efforts.

READ MORE:  Colorado to Use Pot Taxes to Treat Drug Addiction — INSTEAD of Prison

“I got a text this morning from the mother of a young child who I delivered product to,” said Peake. “And the heartfelt thanks from this mother, the difference in this child – the increase in cognitive ability, the reduction in seizures, has been worth every bit of risk that I’ve taken.”

While he shepherds medical cannabis to needy patients in Georgia, Rep. Peake is attempting to further dismantle unjust prohibition. A new bill to expand the list of qualifying conditions for medical cannabis is awaiting the governor’s signature, and one day Peake hopes to see the cultivation, production, and sale of cannabis oil legalized in his state.

The war on drugs is a war on people, as the prohibition of life-saving medical cannabis clearly shows. With persistence and civil disobedience, change can come even to the most staunch prohibitionist states such as Georgia.
Read more at http://thefreethoughtproject.com/congressman-defies-prohibition-to-build-underground-medical-marijuana-network-for-sick-kids/#KdGhCJGYsgMKesYY.99