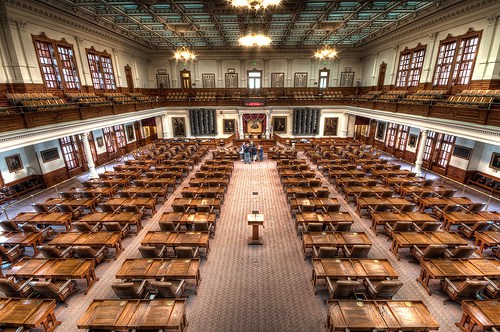 Two Republican legislators in the Texas House of Representatives have signed on as authors of legislation which would establish a whole plant medical marijuana program.

Rep. Jason Isaac, a Republican from Dripping Springs, had previously joined together with Rep. Eddie Lucio III, a Democrat from Brownsville, to author HB 2107, which would expand the Texas Compassionate Use Program (TCUP) established in 2015. Now Rep. James White, a conservative from Hillister, has signed on as well. This could signal that medical marijuana is now a Republican issue.

Republicans control a majority of the House’s 150 seats, currently holding 95 of them.

So far the bill has been referred to the Public Health Committee, and an identical bill, SB 269, is currently waiting in the Senate.

Veterans and patients from around the state have already traveled to Austin this year to lobby both state lawmakers and Gov. Greg Abbott for a whole plant medical cannabis program. A group called Texans for Responsible Marijuana Policy held an exhibit in the hallways of the capitol building as well
to raise awareness about those who need access to such a program.

Retired U.S. Army veteran and school teacher David Bass was one of those veterans at the capitol who both lobbied and worked the exhibit.

“Many are in favor of medical marijuana and share stories about friends and family members in medical marijuana states who have been helped by medical cannabis,” Bass states. “It is also interesting how many people just admit or imply that they use marijuana and these are well-dressed, professional citizens far from the stoner stereotype. A very few people expressed reservations about changing the law, usually based on a family member who used marijuana and also was addicted to and abused alcohol and hard drugs. They see marijuana as lumped in with the harmful drugs and it is hard to change their minds because of the tragedy of a family member or close friend.”

Bass has been working hard to advocate for veterans with Post-Traumatic Stress Disorder and Traumatic Brain Injury, as well as those who suffered terrible wounds during their military service. He also serves as Veterans Outreach Director for Texas NORML.

One patient who went to the capitol, Eric Espinoza, a 33-year-old resident of the Dallas/Fort Worth area, says that despite his five hour trip, it was worth it “to show legislators that there are patients who are fed up enough to knock on a few doors and ask for the support of their representatives, senators, and fellow Texans.”

A 17-year-old girl, Kara Zartler, has also been represented at the capitol by her parents, who must at times administer vaporized marijuana to their daughter. Kara made the front page of the Sunday edition of the Dallas Morning News, which was distributed to every state lawmaker this past week.

She can be seen in the article being held by her parents Mark and Christy as marijuana is administered to her in a vaporized form. Without it, she will punch herself in the head and face, first until blood appears, and then to the point where her bones break. Her school has documented Kara hitting herself 3,000 times in one day. If she gets a hold of anyone during one of these fits, she can do severe damage to them. At one point Kara bit into the bone of her mother’s finger.

The 98 pound girl has both autism and cerebral palsy. The violence stems from her autism, though no one knows what triggers it. The marijuana is the only thing that keeps her calm. A video of one of her outbursts has gone viral around the internet, garnering over 75 million views.

A similar bill was introduced during the 2015 legislative session, however the chair of the Public Health Committee at the time refused to allow a vote on it despite supporters believing that they had enough votes to secure its passage. Many sick Texans and their families are hoping for a better outcome this session.

For information on what you can do to help make progress on this legislation, click here.

Stay up to date with the latest cannabis news from a Texas perspective by following the Texas Cannabis Report social media pages.
Facebook – Twitter – Tumblr – Instagram

Stephen Carter is a 30 year old journalist and information technology specialist living in Waco, Texas and serves as Deputy Director for NORML of Waco. He has been working with the cannabis movement since 2009. He founded Texas Cannabis Report in 2013 to bring Texans accurate cannabis related news.