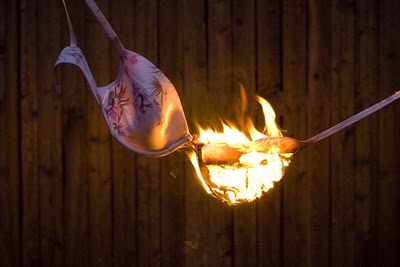 Can Wearing Your Bra Cause Cancer?

There’s little doubt that a bra is an important support device, particularly for women with large breasts who may suffer serious discomfort and even pain otherwise.

However, wearing certain types of bras might not be in your best interest. In fact, if you’re in the habit of wearing the most popular styles, you may be setting yourself up for some potentially serious health problems.

Personally, they make me hot and I find myself always adjusting the darn thing.  I actually gave up wearing bra’s on my two week honeymoon to Costa Rica, five years ago.  Talk about liberating.  I don’t just let the girls “flop around” as I always wear a breathable cami under all my clothes.  I must admit at 53 years of age that I do not have the perk I had in my twenties but I am so comfortable without push-up, underwire bras!   Furthermore, have you EVER had a good fitting bra?  Me neither!  Anyway, who wants to wear a bra when you live on the beach?  Not me.  Although I did give them up before moving to Galveston. Now it seems that science has proved my decision to be a good one.  Read on…

Is Your Bra Helping or Harming Your Body?

There are several potential problems with bras. And while some types of bras are worse than others, simply wearing an ill-fitting bra could spell trouble.

Many physicians and researchers now agree that wearing a tight fitting bra can cut off lymph drainage, which can contribute to the development of breast cancer,[1] as your body will be less able to excrete all the toxins you’re exposed to on a daily basis. Aluminum from antiperspirants, for example, is one potentially dangerous source of toxins that can accumulate if your lymph drainage is impaired.

Says Dr. Michael Schacter, M.D. in his article, The Prevention and Complementary Treatment of Breast Cancer[2]:

The nature of the bra, the tightness, and the length of time worn, will all influence the degree of blockage of lymphatic drainage. Thus, wearing a bra might contribute to the development of breast cancer as a result of cutting off lymphatic drainage, so that toxic chemicals are trapped in the breast.”

Constricting bras have also been implicated in the rise of benign (non-cancerous) but often painful breast cysts and lumps. Says Dr. John McDougall, M.D., in his book titled The McDougall Program for a Healthy Heart:

“After repeated bouts of inflammation, the breasts develop scar tissue in many places, and some of the milk ducts become plugged, forming cysts. Fibrocystic breast disease, not surprisingly, is associated with a higher risk of breast cancer[3].”

You can avoid some of the improper drainage issues if you wear a bra that is properly fitted. Many, many women simply wear bras that do not fit. The website Linda’s Bra School offers plenty of guidance on proper bra fitting and can help you find a more appropriate bra style. 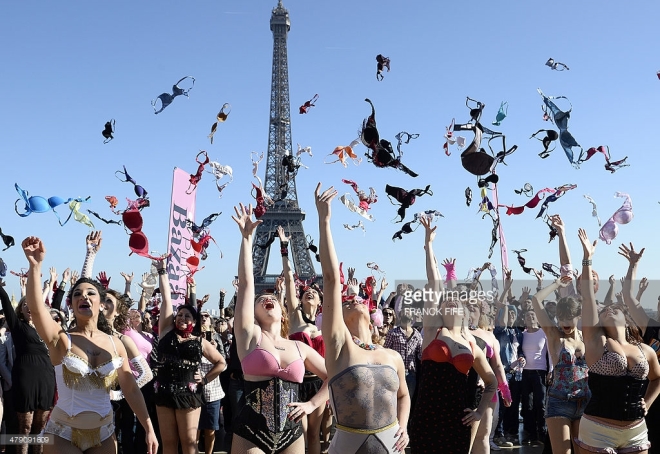 The Underwire Bra — A Cancer-Causing Device?

But far worse for your health than tight or ill-fitting bras is the most popular type of all — the underwire bra.

It’s important to realize that nearly all underwire bras contain metal underwires, coated with plastic. And it is the metal that could ruin your long-term health.

In his 1975 article, Chinese Lessons For Modern Chiropractors, Dr. George Goodheart – known as “the father of Applied Kinesiology” — explained what he calls the “Antenna Effect.”  Essentially, he discovered that by taping a small metal ball over an acupuncture point, you could achieve longer-term stimulation to that point in question. This discovery led to what are now known as AcuAids — small magnetic patches that are used by thousands of doctors across the world.

However, just like a small metal ball, any metal constantly applied to any given energy channel or point on your body can have the same stimulating effect.

He goes on to say:

“These reflexes, like all acupuncture points, follow the Law of Stimulation. In the beginning of stimulating a point, it is stimulated – often causing an increase in associated function. Later on, this continued stimulation causes sedation of that point and a subsequent decrease in its associated function. It’s a mechanical thing.

If a woman keeps the metal underwires on top of those reflex points, over time that WILL mess up the functioning of the associated circuits: Liver, gallbladder, and stomach.

Bottom Line: It will likely make her sick; slowly and quietly.”

In addition to that, the metal wire can also act as an antenna attracting electromagnetic fields, which can also increase your risk of breast cancer.

Bra Wearers May Face Up to 125-Fold Higher Cancer Risk

Medical anthropologists Sydney Singer and Soma Grismaijer — authors of Dressed to Kill: The Link Between Breast Cancer and Bras — conducted a study of over 4,000 women, and found that women who do not wear bras have a much lower risk of breast cancer.[5]

The overall difference between women who wore their bras 24-hours a day and those who did not wear bras at all was a 125-fold difference. Based on the results of this study, the link between bras and breast cancer is about three times greater than the link between cigarette smoking and cancer.

Singer and Grismaijer also found that about 90 percent of fibrocystic patients improve when they quit wearing bras.

I believe the results of this study are compelling, despite the fact that it was not a controlled study for other risk factors. There are few solid studies on bra wearing and breast cancer, but research showing links between the two is not entirely nonexistent.

For example, one 1991 study, published in the European Journal of Cancer, found that premenopausal women who did not wear bras had half the risk of breast cancer compared with bra users.[6]

Another group of Japanese researchers discovered that wearing a girdle or bra can lower your levels of melatonin by 60 percent.[7]The hormone melatonin is intimately involved with the regulation of your sleep cycles, and numerous studies have shown that melatonin has anti-cancer activities.[8] It’s also a powerful antioxidant, and can prevent DNA damage and bind to T-helper cells. Furthermore, researchers in Spain published a study detailing the possible use of melatonin in breast cancer prevention and treatment.[9]

Wearing metal on your body is something you generally want to avoid, and since many women wear their bras for the better part of the day, it would be sensible to find a healthier alternative to your metal underwire bras.

If you feel you need the underwire, please consider switching out the metal wire in your favorite bra for a plastic wire. You may be able to find them in your local fabric store, or you can purchase them online. BraMakersSupply.com is a great resource.

Simply replacing your metal underwires with plastic ones are your best alternative solution if you don’t want to forego the underwire entirely.

You can easily do this on your own simply by snipping a tiny hole in the fabric at the end of the underwire, on the inside of your bra. Slide the old wire out and replace it with the plastic wire, which can easily be cut to the correct length to fit. Then throw a few stitches across the hole to keep the wire from sliding out of the casing.

BraMakersSupply.com is one of the few companies that carry the whole range of plastic wire sizes and ship across the world. And at $2 per pair, protecting your long-term health couldn’t be much more affordable.

An even better option is to opt for a wireless style bra, which are now available in most brands, and for various levels of support. Sports bras and camisoles with a built-in shelf bra are other options that can work well, especially if your bust is on the smaller side.

Life comes down to the choices you make, and then living with the results.  It’s important to remember that you almost always have options — healthier options. Some require more work than others, but in this case it really won’t take much to make a meaningful change that can help you have a healthier body and life.

Switching out your bras won’t replace the need for an otherwise healthy lifestyle to avoid breast cancer. But it may be a very useful adjunct.

Scientists Have Recently Advised Women To Stop Wearing Bras. This Is Why…