OK.  Who does NOT like bacon.  I adore bacon in most all forms.  If I can use bacon in a recipe I will.  My chocolate covered bacon was the hit of the last Super Bowl party I attended.   That recipe will be posted another time!  Oooh, white chocolate, dark chocolate, milk chocolate, sea salt, cayenne pepper, and yes, I am drooling thinking about those tasty morsels.  So, while surfing the net as I was cooking bacon weaves for sandwiches this evening I came across a recipe that I cannot wait to try.  I’ve adapted it a bit as I consider my self somewhat of a bacon connoisseur. Some of my favorites are bacon wrapped Chicken Legs, bacon wrapped Chicken Tenders, bacon wrapped Shrimp, bacon wrapped BBQ Onion Meatball Bombs, stuffed bacon wrapped Jalapeños, and the list goes on and on of so many other delectable delights “a La bacon”.  Hold on to your hat gang because this is a winner of a recipe!  Are you ready?!  Let’s go.

1 lb thick cut bacon
6 tablespoons brown sugar (or more)
1 teaspoon cayenne pepper
1 teaspoon cracked black pepper
1 teaspoon red pepper flakes ( I’d cut his down or omit all together as it is way to hot and will cause too many hot spots, unless your from Louisiana!)

An optional ingredient would be cinnamon!  I’d totally add at least 1 teaspoon of cinnamon!

Begin by preheating your oven to 350° and lining a baking sheet with parchment paper. (You can substitute aluminum foil if you don’t have any parchment paper lying around.) Then sprinkle the bacon with about half of the brown sugar. 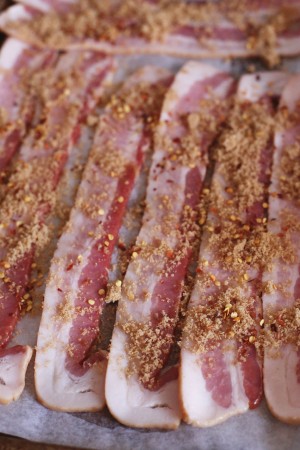 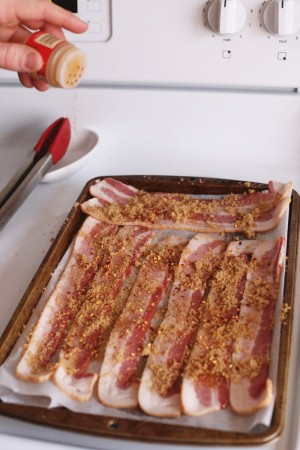 Sprinkle on the red pepper flakes (OR NOT), cayenne and cracked black pepper. One of the things that’s great about this recipe is how easy it is, so you don’t have to be a whiz in the kitchen and it’s kinda hard to make anything bacon related that isn’t WONDERFUL!!! 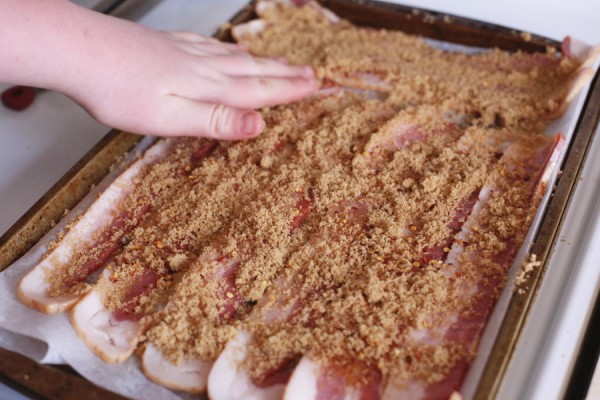 Sprinkle the rest of the brown sugar on the top and then give it a good pat all over. Think of it as a rub that’s going to coat your bacon in candy-like goodness. You don’t really have to worry about coating the reverse side because as the bacon cooks, the sugary coating will run under it and coat the other side of the bacon, too. Then just pop it in the oven and bake for 20 – 30 minutes, or until it reaches your desired crispiness. Done and done! Easy peezy!

And there you have it! Served up alongside homemade Belgian waffles and poached eggs. Heck, if your gonna have candied bacon you may as well splurge on a good old fashioned fried egg!  The heat of all the peppers tempers out the brown sugar and makes for a really yummy brunch treat or a heck of a midnight meal!

Bon Appetite from the beach!